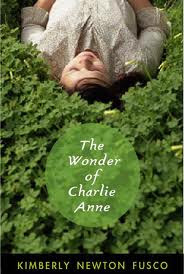 THE WONDER OF CHARLIE ANNE has been nominated for Connecticut's 2013 Nutmeg Book Award!
It is very exciting to be nominated because students across the state of Connecticut read the nominees and then cast their votes for a winner. CHARLIE ANNE joins nine other books in the intermediate category. All will be displayed at public libraries, school libraries and book stores throughout Connecticut.
The Nutmeg Book Award encourages children in Grades 4 to 8 to read quality literature. Jointly sponsored by the Connecticut Library Association (CLA) and the Connecticut Association of School Librarians (CASL), the Nutmeg Committee is comprised of children's librarians and school library media specialists.
Here's what the committee has to say about THE WONDER OF CHARLIE ANNE:
"Charlie Anne’s father leaves Massachusetts to find work during the Depression, leaving his family with their miserable cousin Mirabel and a farm full of chores. When another girl moves in next door, Charlie Anne is thrilled, but some townspeople don’t feel the same way. Can Charlie Anne and Phoebe help their town overcome prejudice? "
Congratulations to my fellow nominees:
Baseball Great
by Tim Green
Because of Mr. Terupt
by Rob Buyea
Born to Fly
by Michael Ferrari
The Mostly True Adventures of
Homer P. Figg
by Rodman Philbrick
My Life As a Book
by Janet Tashjian

Where the Mountain Meets the Moon
by Grace Lin