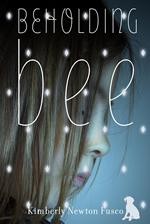 Thank you for this lovely review from Sarah Rachel Egelman
at KidsReads!

"Ever since Bee’s parents died when she was quite young, she has lived with the traveling carnival, sleeping in the back of a truck and serving hot dogs to those who stare at her and mock her. The birthmark, covering much of one side of her face, may be a “diamond” to Bee but to others it is an ugly curse and an excuse for cruelty. Bee’s only protector is Pauline, another carnival employee, who was entrusted with Bee’s care. Bee and Pauline, young and lacking resources, dream of a home of their own, far from the mean ways of their boss Ellis and those who would hurt Bee because of how she looks. When Pauline leaves the carnival, and leaves Bee behind, Bee sets off in search of the home she longs for and maybe even a family who will love her as she is.

BEHOLDING BEE is a compelling and tender examination of identity and belonging by Kimberly Newton Fusco. It is also an enigmatic novel that packs an emotional wallop but remains ever hopeful.

"Set against the bleak landscape of World War II America, BEHOLDING BEE is an amazing and tender story with fascinating characters and a few wonderful twists and turns."

Though Pauline is devoted to Bee --- watching out for her, teaching her, loving her --- the pull of romance is too strong for Pauline to resist. In her mid-twenties, and never having had a boyfriend, she is charmed by Arthur, the flirtatious newcomer to the carnival. And, even though it breaks Bee’s heart (not to mention that of Bobby, the shy pig keeper who is quietly in love with Pauline) and leaves her vulnerable, Ellis sends Pauline away with Arthur. With Pauline’s departure, Bee comes to rely on the stray dog, Peabody, she has adopted and Bobby, who, in the weeks before he himself leaves the carnival looking for work, teaches her how to run fast. Running fast, Bobby believes, may save Bee from danger.

Set against the bleak landscape of World War II America, BEHOLDING BEE is an amazing and tender story with fascinating characters and a few wonderful twists and turns. There is much heartbreak and loss in these pages but it is realistically optimistic. This is a delightful novel with a good balance of tension and whimsy. Its exploration of family, friendship and self is set in a beautiful tale following a powerful and unique protagonist.